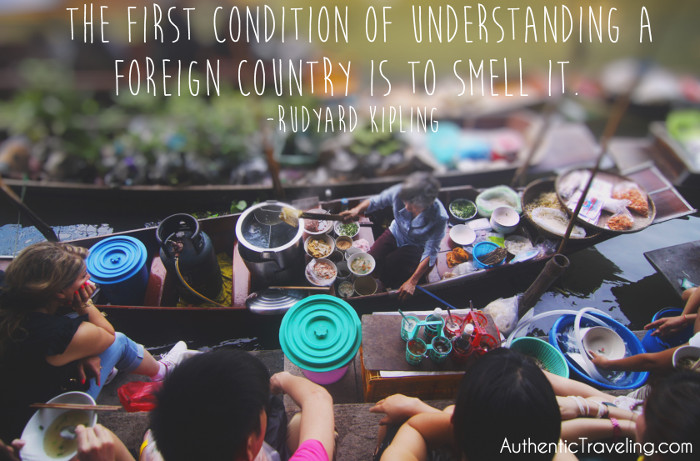 This week's travel quote is attributed to Rudyard Kipling*, a nineteenth-century British journalist, poet, and novelist. He is perhaps best known for his 1894 novel The Jungle Book, which was later turned into a much-beloved cartoon by Disney.

Rudyard Kipling was born in Bombay in 1865, in then-British India, but spent much of his youth in England. He subsequently returned to Bombay, where he started a career as a journalist. Over the next few years he traveled extensively throughout Europe, North America, Africa, and Asia where he was exposed to all manners of sights and smells—which would eventually add spice to his writings.

Rudyard Kipling's words highlight a fundamental truth about travel; namely, that our senses play an incredibly important role in our experiences. Photos and video can capture the physical properties of exotic locations—the shapes, the colors, the dimensions, some of the sounds—but you'll never know what it's like to be there without the use of the rest of your senses. You need to smell the scent of salt water to understand Venice and you need to feel the mountain top breeze against your skin to comprehend Machu Picchu.

Here's an experiment; head to a nearby park and sit down on a bench, and close your eyes. For the next five minutes, I want you to concentrate solely on the the sensory information you are receiving. What do you hear? What do you feel? What do you smell? I guarantee that you will  have a better understanding of what that park really is like than you ever have before.

Now imagine doing this same thing every time you traveled. What kinds of things would you learn then? Trips can be so full distractions and worries that it's easy to look past the basic qualities that make each and every place unique. By starting with your senses, you can take the first step towards having more fulfilling and relaxing travel experiences.

*According to my research, this quote may in fact come from a 1943 essay by T.S. Eliot on Kipling's verse. Regardless of its origin, the substance of the quote remains the same.