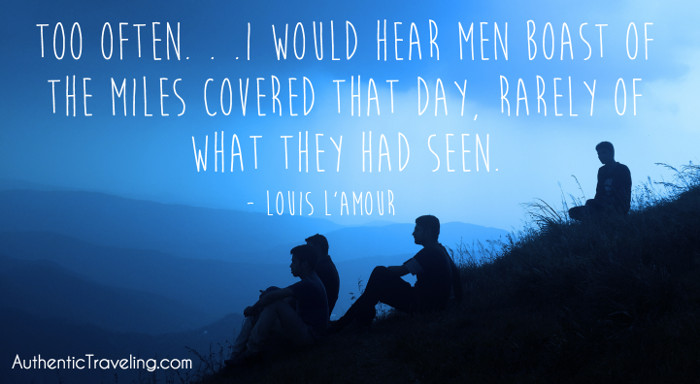 This week’s travel quote comes from Louis L’Amour, an American novelist and short story writer. He is best known for his novels about the American West, but he also wrote science fiction and poetry.

He was born in small-town North Dakota in 1908. Growing up surrounded by farmland, he was fascinated by the cowboys who drove their herds of cattle through town. At the age of 15, an economic downturn forced him and his family to hit the road, where they worked as itinerant farmhands. It was at this time that L’Amour encountered a number of authentic Old West personalities, many of whom inspired characters in his later novels.

As a young adult, L’Amour worked as a merchant marine and a professional boxer, allowing him to travel to such exotic locals as Japan, Arabia, China, and Panama. During World War II, he fought for the U.S. Army in Europe.

These international experiences, as well as his time growing up in the western United States, were instrumental in developing L’Amour’s writings, which mainly focused on our personal development in a rugged and uncertain world

This week’s travel quote, “Too often… I would hear men boast of the miles covered that day, rarely of what they had seen” speaks to the importance L’Amour placed on the internal journey. The physical distance one travels only affects your body insomuch as it can tire you; what you see—what you TRULY experience—affects your mind, and ultimately imparts change.

So many people only care to visit a place to say that they’ve been there. They discuss passport stamps as though it was a currency that could automatically be cashed in for knowledge. Of course, we know better than this. You have to put effort into your travels to get something in return. The quantity of the miles don’t matter; it’s the quality that counts.

I urge you to consider L’Amour’s quote next time you travel. What can you see, do, smell, or feel? Seek out those things and you’ve have a more rewarding trip.