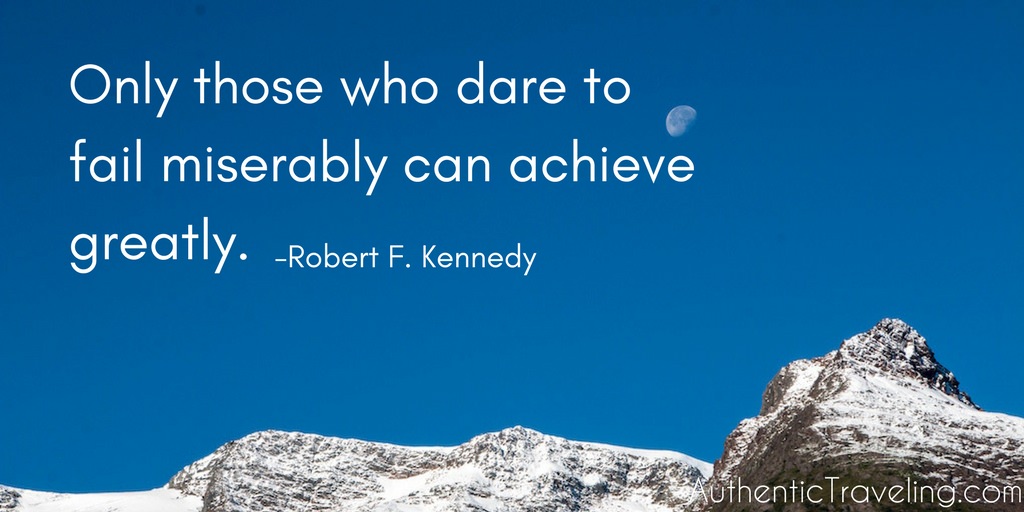 “Only those who dare to fail miserably can achieve greatly.”

On this date 51 years go, Robert F. Kennedy said these words during an anti-Apartheid speech at the University of Cape Town. He had been invited there by a group of students who were hoping to create a movement in South Africa similar to that of the American Civic Rights Movement.

During his speech, Kennedy warned the students about the dangers that come about when trying to enact positive change. In particular, he cautioned them to avoid expediency, the temptation to do what’s easy rather than what’s right. To accomplish anything great, he argued, you must embrace the possibility that following your beliefs may result in failure.

Thinking back on my own experiences, Kennedy’s worlds hold true. Doing the expedient thing has never brought me real happiness or wisdom. Rather, it’s been the difficult but principled tasks that have helped me to grow.

For example, living the corporate life may have taught me about office politics and spreadsheets, but I didn’t really learn anything about myself (other than that I hated working in an office). In contrast, I’ve gained a much deeper understanding of what I want in life from taking the financial and social risk that is being an entrepreneur.

And I think the same principle applies to travel. Unless you’re willing to risk something—ex: your time, your comfort, or your pride—you are by nature avoiding the people, places, and activities that create unforgettable memories and bring about life-changing epiphanies.

Of course, it’s not easy to accept such risks. Our bodies are programmed to avoid them, and society regularly reminds us constantly to live between the lines.

Yet countless examples tell us that playing things safe won’t lead to great results—whether at work, at home, or on the road. The best memories come about when we face something new, when we challenge our beliefs, or when we risk everything to follow our passion.

How many inventors have made our lives better because they looked to create more of the same? How many athletes have achieved greatness because they aimed to be mediocre? How many travelers have come home a new person because they spent their time only doing what was comfortable?

Great achievements in life come about only when you’re wiling to pay the toll, and the accepted currency is risk.